Protection of people and valuables

Composhield A/S originates from being an internal development division in the company Giantcode A/S, where the dedication to excellence in ballistic and blast protection was established. In 2001 Composhield A/S was formed as an independent company.

Composhield A/S has today several patented technologies and continues to research, in co-operation with national and international universities, in the field of composite materials. Our key focus is to bring tomorrow's technologies into today’s marketplace.

Composhield's vision is to become the preferred supplier of protective solutions for civilian and military applications through innovative and progressive new technologies.

We want to enable our customers to implement secure applications for protection of humans and other valuables against blast, ballistic impact and other hostile actions.

Composhield A/S started in 1996 as an internal research project in the company Giantcode A/S. From 1996 and until the forming of the company Composhield A/S, which stands for Composite Shielding, several project teams were developing new protection technologies for the future.

All efforts were purely put into research as the strategy was to develop unique patented technologies before any commer-cialization. All research was done in close cooperation with international universities, armed forces, as well as some of the largest global defense companies.

Composhield A/S was then formed in year 2000 and has today seven patents and patent pending technologies and products. In 2007 Composhield A/S formed a joint-venture, AMTANK Armor LLC., togehter with American Tank & Fabricating Company, to serve the North American market.

Our strategic intent is to develop tomorrow's technologies for today's global market, with the main focus on strategic partnership and superior quality.

AMTANK Armor, located in Strongsville, Ohio, designs and manufactures survivability components for OEMs, Tier I and Tier II partners. The company was founded as a joint venture between US-based American Tank & Fabricating Company and Composhield A/S.

AMTANK Armor offers a unique combination of leading-edge manufacturing capabilities and composite armor technologies with an ongoing commitment to research and development. Our focus is design and manufacturing of armor materials for vehicle platforms to protect against blast, ballistic and other hostile actions. 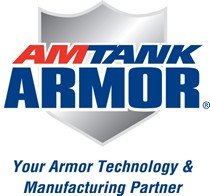